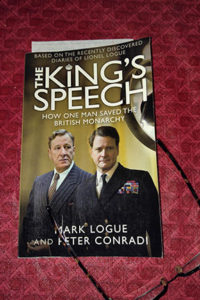 I count “The King’s Speech” as one of my all-time favorite movies. In fact I could argue it is my favorite movie of all time (so far, at least). The story relates how speech therapist pioneer Lionel Logue helped King George VI overcome his lifelong stammer. Mark Logue (Lionel’s grandson) and Peter Conradi wrote the companion book, The King’s Speech: How One Man Saved the British Monarchy that goes further into detail of Lionel and the king’s relationship than does the movie.

I have been reading this inspirational book of late, and came across a quote from an article Lionel Logue published in the Daily Express in March 1932 which I want to share with you. His article was in a series of “Health and Home Talks” and was entitled, “Your Voice May Be Your Fortune”.

The English voice is one of the finest in the world but its effect is often spoiled by wrong production. Only a minimum of people realise what an asset it may be. Was it not Gladstone who said, ‘Time and money spent in improving the voice pay a larger interest than any other investment’. This is a strong statement, but I agree with it.

As a speech therapist and voice coach, I also agree.

Many people have trouble seeing their voice as an asset, and work hard to avoid speaking opportunities as a result. The idea of investing in their voice seems like a waste of time, money, and energy, and they just don’t bother. Even if they don’t have obstacles like a stammer or stutter to overcome, they become blocked by fear and self-doubt. They are afraid of forgetting what they will say, looking or sounding foolish, shaking uncontrollably, being judged, making a mistake, squeaking or cracking their voice, stumbling over their words, not meeting others’ expectations, and/or other similar worries. Speaking in public is terrifying and paralyzing to them. Giving into their fear, they miss out on the potential return on investment of using and improving their voice.

Can you relate? If you are one of those people, there is hope. Just like King George VI, you can overcome your speaking anxieties and move others with your voice. It is important for you to speak because your voice is not only an asset for you in achieving your goals, but also a gift to others.

I lost my father six months ago, and some days I miss him terribly. Remembering his voice provides comfort in those times. I can still hear it in my head and on the few recordings we have of him. His voice was a gentle, smooth, and comforting baritone (except when his voice became a deep bass due to a cold). Love and acceptance oozed out with his words in a slow, easy pace that made me feel appreciated and safe.

Whose voice is a gift to you? Aren’t you glad you are able to receive that gift?

I encourage you to invest in your voice. This could simply mean taking the time to record it for your children and loved ones (or allowing them to record you). It could also involve hiring a voice coach to build your speaking confidence and skill. Whatever the investment, here is the bottom line: don’t take the power of your voice for granted. Say hello. Share your stories. Sing a song. Give a compliment. Say “I love you” more often. Try Facebook Live or other technology for putting your voice out there. We won’t know what you have to say if we can’t hear you, and that would be unfortunate.